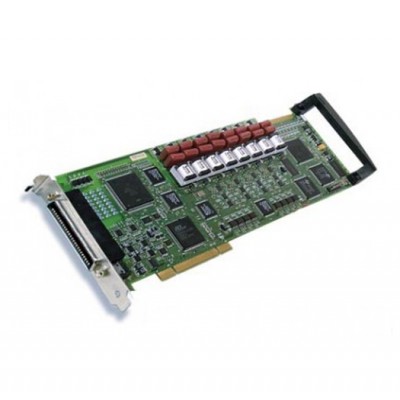 Designed for analog networks, the SmartWORKS LD has both passive and terminate network interface capabilities. Featuring programmable voltage thresholds and loop reversal detection, the SmartWORKS LD is easily configured to accommodate variations across analog networks. This product is offered in 4, 8, 16 and 24 port versions, suitable for small to large offices and call centers.

LDA full size board shown below.

Tap Environment
The LD series accomodates low to high density environments with 4, 8, 16, or 24 port blades. The SmartWORKS API supports a total of 512 channels per system. The tapping point can be anywhere on an analog line: between Central Office and PBX, Central Office and phones, or PBX and phones.

Terminate Environment
The LD series can be used to initiate as well as terminate calls. When configured as an interactive resource, phone lines can directly connect to and terminate on the LD blades. Standard ring detection is available.

World-Wide Analog Support
The SmartWORKS LD supports passive call recording on ground start and loop start analog networks. It has line terminating capabilities for loop start environments. Features such as programmable voltage thresholds, voltage detection, and polarity reversal are managed through the common SmartWORKS API. As a result, the SmartWORKS LD easily adapts to variations found on analog systems throughout the world.

Built in Performance Monitoring
Built in voltage detection allows SmartWORKS LD to distinguish a disruption of service if a cable is damaged or disconnected. This feature is unique in the industry and only available on the LD series.

Customer Details, please fill out the form below